A photo from stage makeup a couple years ago, as requested by 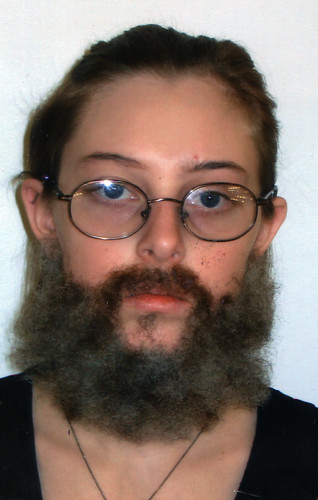 I look pretty good in a beard, if I do say so myself.

Over the last two evenings I have ripped all the grass and most of the elm trees out of the... I don't really want to call it flower bed, as it came with the house and was only a vaguely defined shape filled with mystery bulbs and weeds and what are probably begonias. Anyway, I ripped out most of the offending grass(some of it was too tough for me, which I'm sure I'll regret later) hacked the elm trees and through on some bags of top soil and garden soil(whatever that is) then turned over and raked it about a bit. I doubt it will do much to improve the condition of the soil, since what's really needed is a lot of compost, some manure and a backhoe, but at least it's something.

Today I covered the area with mulch and planted flowers. in pots. Because, well I have a lot of pots, and I understand pots. Twelve dollars worth of 6 pack petunas looked sort of sad when compared to the 18' by 3' bed of probably certain death(and begonias.)  So I made some nice containers and planted some lemon balm and rose moss around the side of the house in the hopes it would at least fill in the empty dirt over there, if not deter the elm trees( Why is it elms can grow where nothing else can?) By the time I finished planting the lemon balm it was 9pm, pitch black,  I'd hit my self in the face with the shovel, and the neighbors were probably contemplating calling the cops because the creepy neighbor woman might be burying a body.

But hey, at least we probably wont get another housing violation letter.

My partner lack's of interest in certain activities, such as pricing chain link fence hardware, continues to baffle me. But I'm a maximizer at heart, and the point of diminishing returns is usually posted on a road sign I blew past at 80 about two miles back.

He, on the other hand, would not research a project at all until... ever. Which is why there is still a partly disassembled washing machine in my basement which may, or may not be reparable. Bless him.

I'm planning a hostile takeover of a local Lolita and costume tea party event. I am fully prepared to out awesome all those who stand in my way. and I will do it without polyester or gold lamé!
Who's with me?!

One I had an awesome pair of pants. They were durable black straight leg cargos with silver zippers, just enough pockets to be both stylish and useful without looking gimmicky. Then I fell off the roof of a two story building in Deleno and ripped them irreparably.
I miss those pants.

I would rather be human than perfect.
I will not be driven by vanity or insecurity.
I will live sustainably, creatively, originally, and mindfully.
I will burn bright, but I will NOT burn out.

It is much easier to sell a beat up coffee table than a fiberglass truck topper.  Perhaps ease of sale is inversely proportional to the amount of money you will be making.

red handle on caboose, originally uploaded by House Of Sims.

Valentines day. I care about it less every year.

About four years back, the week before valentines day, I want to say 3 and 2 days before it respectively, a long time friend and I had a major falling out of a douchbag of an ex and my grandfather passed away. Between being what I thought of an utterly betrayed someone I'd been friends with since childhood and losing someone close to me I couldn't give a shit about the holiday. Seeing my grandmother is such pain was the worst; he had proposed to her on valentines day.

I've gained perspective on the broken friendship and do not grieve my grandfather so much now. But ever since then I just can't get worked up about a bunch of pink paper hearts in store windows. I like chocolate and roses, I even like pink, red, and white. Yes, it's commercial, it sends a lot of fucked up messages about love and it makes a lot of singles uncomfortable. That all sucks, but that's true about our culture in general.

Now, when February 14 rolls around I'm pretty thankful for how good my life really is. Frankly I think I pay more attention then I do on thanksgiving; I always hear someone talking about how they hate the holiday, and I remember that I used to, and why I don't anymore. I'm thankful for friends and family and health and plumbing. I'm thankful for all the first world conveniences I take for granted, and for the little things, like new tennis shoes and chocolates at 75% off next week.

On the 10th I got a fix it ticket for my tag light being out. I was told I had 10 days to fix it and get it signed off on. Which I did. I haven't mailed it in yet because I lack any stamps or envelopes and the police officer ripped up the one that comes with the ticket(thanks dude.)
Today I get a notice that my "moving violation remains outstanding" and 30 days from the 27th my licence will be suspended if it's not taken care of. Looking at the ticket it says I have to bring it to the court within 10 days, not just get it signed.
Okay, so now I have to pay a fine and/or turn it in? I go to the website to check what the fine is. It says defective equipment repaired and approved prior to Suspension Order have no fee.
What is a suspension order? Is that the notice I got? Is that when they actually suspend my licence 28 days from now? Is it some other thing which is define nowhere on the ticket, notice, or website? What do I DO?

My current plan is to call them and wait on hold for about 2.7 hours monday when the office is open(why do these things always happen on fridays?) and ask them, but I don't trust them to A. know or B. tell me. Any of you have any idea what this shit means?

in the past week I have
- Stopped taking my new meds because they made me violently ill.
- Spent 8 hours listening to horrible pop music while getting my hair done(did a hair show and photo shoot for a friend). The music sucked, the haircut on the other hand, is AWESOME.
- Spent RIDICULOUS amounts of money. And not on anything cool, no on a new mattress and bedding. And I couldn't be more excited! I've never owned a nice mattress before, I can't wait till they deliver it next week.*
-Made meal plans and did shopping for at least 2 weeks, probably closer to 3 if you included left overs.

Probably a lot of other things too, but those were the highlights. I will post pictures of the haircut when I either get around to taking some or get copies from the shoot, whichever comes first. I will also probably log in to gloat about how awesome my net mattress is. Which, considering what we're sleeping on now, does not seem like much of a sin to me.

* apparently no one wants/owns/buys full sized beds anymore. The mattress had to be special ordered and frames are impossible to find at a decent price. Apparently floor space and cuddling are over rated. who knew?
Collapse